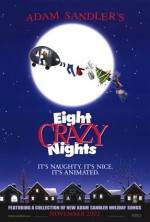 Synopsis: Adam Sandler and director Seth Kearsley present an animated Hanukkah tale with ADAM SANDLER'S EIGHT CRAZY NIGHTS. Davey Stone (Sandler) is lurching down a wayward path. He's a drunk and aging delinquent, infamous in Dukesberry for spreading misery as deftly as he belches full sentences. He's facing prison when Whitey Duvall (Sandler again), a lovable, physically challenged man, proposes that Stone work with him at the community center as a referee for the local basketball league. The surly Stone accepts the job, and moves in with Whitey and his twin sister, Eleanore (also voiced by Sandler). But the true test is whether Stone can rise above his self-destructive habits in order to reunite with his former girlfriend, Jennifer (Jackie Titone), and act as a role model for her young son, Benjamin (Austin Stout).