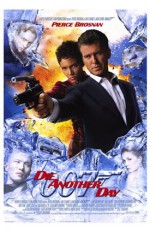 Synopsis: In DIE ANOTHER DAY, the 20th James Bond adventure, 007 (Pierce Brosnan) gets off to a rough start when he's captured and subsequently tortured during an assignment in North Korea. When the suave secret agent is eventually liberated, he embarks on a dangerous mission that involves tracking a terrorist named Zao (Rick Yune) to Cuba, where 007 also encounters Jinx (Halle Berry), a highly formidable and alluring fellow spy. Soon Bond is back in England following a mysterious trail that leads to Gustav Graves (Toby Stephens), a flamboyant diamond mogul. After a rather bloody introduction, Graves invites 007 to Iceland, where he plans to unveil his enigmatic Icarus project. Before long, Bond and Jinx are reunited and battling Graves, Zao, and other villains bent on world domination.