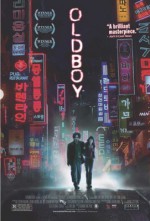 Synopsis: It would be a sin to reveal too much about this riveting and bizarre thriller from Korean director Chan Wook Park, except to say that it's about a man named Dae-Su (Choi Min-Sik) who is locked in a hotel room for 15 years without knowing his captor's motives. When he is finally released, Dae Su finds himself still trapped in a web of conspiracy and strangeness. His own quest for vengeance becomes tied in with romance when he falls for an attractive sushi chef (Gang Hye-Jung), who feeds him live octopus and who may or may not be involved with the bizarre mystery. This is all served up in a striking palette of purples and dark reds; oozing with post-neo-noir style, and stuffed with insanely malicious twists and turns. Choi Min-Sik is terrific in the lead, counterbalancing over-the-top hysterics with deadpan cool to run the gamut of Asian antihero traits. There are intense fight scenes (Dae Su's favorite weapon is a hammer), look-away moments of torture and self-mutilation, sex, and gallons of black humor. Not for the squeamish, but for those seeking something wholly original and daring, this cinematic entree is alive--it's hard to imagine a better slice of psycho-shock sensationalism.