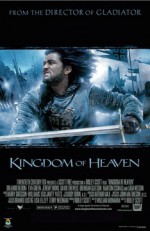 Synopsis: Kingdom of Heaven is an epic adventure about a common man who finds himself thrust into a decades-long war. A stranger in a strange land, he serves a doomed king, falls in love with an exotic and forbidden queen, and rises to the knighthood. Ultimately, he must protect the people of jerusalem from overwhelming forces - while striving to keep a fragile peace. From Ridley Scott, the Master of the Modern Epic.