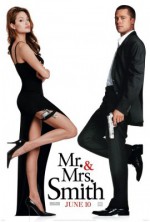 Synopsis: John and Jane Smith are an ordinary suburban couple with an ordinary, lifeless suburban marriage. But each is hiding something the other would kill to know: Mr. and Mrs. Smith are actually highly paid, incredibly efficient assassins, and they work for competing organizations. Mr. and Mrs. Smith discover a new source of excitement in their marriage, when they're hired to assassinate each other...and that's when the real fun starts. The result is the ultimate action spectacle, as Mr. and Mrs. Smith put their formidable skills to work and their marriage to the ultimate test. -- © 20th Century Fox