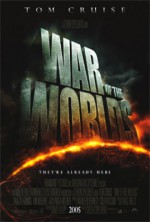 Synopsis: Cruise stars as Ray Ferrier, a divorced dockworker and less-than-perfect father. Soon after his ex-wife (Miranda Otto) and her new husband drop off his teenage son Robbie (Justin Chatwin) and young daughter Rachel (Dakota Fanning) for a rare weekend visit, a strange and powerful lightning storm touches down. Moments later, at an intersection near his house, Ray witnesses an extraordinary event that will change all their lives forever. A towering three-legged war machine emerges from deep beneath the earth and, before anyone can react, incinerates everything in sight. An ordinary day has suddenly become the most extraordinary event of their lifetimes - the first strike in a catastrophic alien attack on Earth. -- © DreamWorks Pictures

Visit the official War of the Worlds website. | View the trailer.

AllPosters: Get Price War of the Worlds (Widescreen Edition)