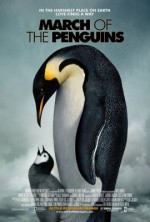 Synopsis: Coming from a French director, Luc Jacquet, the miraculous MARCH OF THE PENGUINS would have to be a love story. And it is, in that it follows the mating rituals of the emperor penguin, one of the most resilient animals on earth. Each summer, after a nourishing period of deep-sea feeding, the penguins pop up onto the ice and begin their procession across the frozen tundra of Antarctica. Walking in single file, they are a sight to behold. Hundreds converge from every direction, moving instinctively toward their mating ground. Once there, they mingle and chatter until they find the perfect mate--a monogamous match that will last a year, through the brutal winter and into the spring. During that time, the mother will birth an egg and then leave for the ocean to feed again. The father will stay to protect the egg through the freezing blizzards and pure darkness of winter, which would be deadly to practically any other species. Finally, with spring, the egg hatches and the baby penguins are born. Mothers return from the sea to reunite with their families and feed the starving newborns, while the fathers are finally relieved of their protective duties after months without food.

Visit the official March of the Penguins website. | View the trailer.