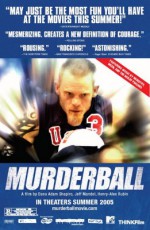 Synopsis: For the determined quadriplegic men who participate in the dangerous sport of "quad rugby," it's more than just a game: it's a chance to prove themselves in a much bigger way. With armored wheelchairs and enough macho energy to overcome any challenge, the players engage in a violently physical game. The charming but intimidating Mark Zupan was angry and suicidal after a car accident relegated him to a wheelchair. He regained his confidence and spirit by becoming both a player and the spokesman for quad rugby's Team USA. Zupan's militaresque rival, Joe Soares, is a former star for Team USA who headed north to coach Team Canada when he was cut from the US team in 2000. Concentrating on the buildup to the 2004 Paralympics in Athens, the film introduces other awe-striking figures--young men who have risen to the challenge of the game time and time again.

Merchandise Enron - The Smartest Guys in the Room DVD