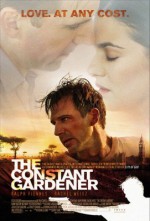 Synopsis: The Constant Gardener, based on a bestselling novel by John Le Carré, is an exciting mix of romance and spy thriller. Ralph Fiennes stars as Justin Quayle, a low-level British diplomat who has always gone about his work very quietly, not causing any problems. But after his radical wife, Tessa (Rachel Weisz), is killed, he becomes determined to find out why, thrusting himself into the middle of a very dangerous conspiracy. Jeffrey Caine's powerful screenplay alternates between flashbacks of Justin and Tessa's relationship and Justin's hunt for the truth, which makes him a target--although he doesn't know who is after him.

Visit the official Constant Gardener, The website. | View the trailer.