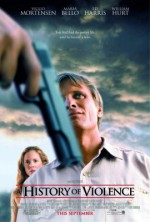 Synopsis: A thriller from director David Cronenberg, A History of Violence stars Viggo Mortensen as a pillar of a small town community who runs a diner and lives a happy and quiet life with his wife (Maria Bello) and two children. But their lives are forever changed when Mortensen thwarts an attempted robbery and is lauded as a hero by the media, attracting the attention of some mobsters (William Hurt and Ed Harris) who believe he is someone else. -- © New Line Cinema

Visit the official History of Violence, A website. | View the trailer.