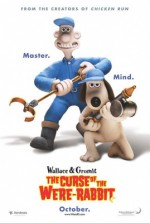 Synopsis: The cheese-loving Wallace (Peter Sallis) and his ever-faithful dog Gromit-the much-loved duo from Aardman's Oscar«-winning clay-animated "Wallace & Gromit" shorts-star in an all new comedy adventure, marking their first full-length feature film. As the annual Giant Vegetable Competition approaches, it's "veggie-mania" in Wallace and Gromit's neighborhood. The two enterprising chums have been cashing in with their pest-control outfit, "Anti-Pesto," which humanely dispatches the rabbits that try to invade the sacred gardens. Suddenly, a huge, mysterious, veg-ravaging beast begins terrorizing the neighborhood, attacking the town's prized plots at night and destroying everything in its path. Desperate to protect the competition, its hostess, Lady Tottington (Helena Bonham Carter), commissions Anti-Pesto to catch the creature and save the day. Lying in wait, however, is Lady Tottington's snobby suitor, Victor Quartermaine (Ralph Fiennes), who'd rather shoot the beast and secure the position of local hero-not to mention Lady Tottington's hand in marriage. With the fate of the competition in the balance, Lady Tottington is eventually forced to allow Victor to hunt down the vegetable chomping marauder. Little does she know that Victor's real intent could have dire consequences for herģand our two heroes.--® DreamWorks

Visit the official Wallace & Gromit: The Curse of the Were-Rabbit website. | View the trailer.

Reviews and articles Copyright ®2002-2006 their respective authors. No content, except text explicitly
provided in the web feeds, may be reproduced without prior written permission from the author(s).
SMART-POPCORN.com, images, and characters Copyright ®2002-2006 Thom Stricklin.
All rights reserved.