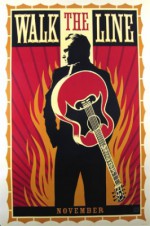 Synopsis: He picked cotton, sold door to door, and served in the Air Force. He was a voice of rebellion that changed the face of rock and roll. An outlaw before today's rebels were born - and an icon they would never forget. He did all this before turning 30. And his name was Johnny Cash. WALK THE LINE explores the early years of the music legend, an artist who transcended musical boundaries to touch people around the globe. As his music changed the world, Cash's own world was rocked by the woman who became the love of his life: June Carter.

Visit the official Walk the Line website. | View the trailer.

Amazon: $7.99 Johnny Cash At Folsom Prison: The Making of a Mast