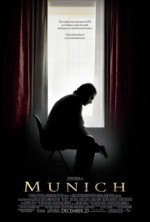 Synopsis: Munich recounts the dramatic story of the secret Israeli squad assigned to track down and assassinate 11 Palestinians believed to have planned the 1972 Munich massacre -- and the personal toll this mission of revenge takes on the team and the man who led it. Eric Bana (Troy) stars as the Mossad agent charged with leading the band of specialists brought together for this operation.