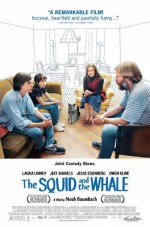 Synopsis: Set in the stately yet off-kilter neighborhood of Park Slope, the film tells the story of the Berkmans, a quintessentially New York family struggling to keep things together. Family patriarch Bernard (Jeff Daniels) is a published author and writing teacher whose insecurity over his own lack of recognition continues to plague him. Meanwhile, his wife, Joan (Laura Linney), is grappling with her own sense of unsettlement. Their sons, who are caught in the crossfire, express their confusion in different ways: 16-year-old Walt (Jesse Eisenberg) tries to pass off Pink Floyd's "Hey You" as his own hit in the school talent show, while his 12-year-old brother Frank (Owen Kline) begins to explore his budding sexuality. When Bernard and Joan finally decide to separate, the family must confront their unraveling situation head on.

Visit the official Squid and the Whale, The website. | View the trailer.