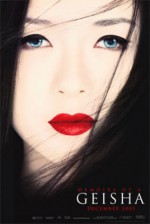 Synopsis: The film opens in a remote Japanese fishing village in 1929, where two sisters, Chiyo and Satsu, are sold by their troubled father to people who place Chiyo in a classy geisha house known as an okiya in Gion and Satsu in a much more vulgar and dangerous district. Chiyo becomes a maid to Hatsumomo, a cold, controlling, and calculating geisha who is instantly jealous of Chiyo's unusual, beautiful eyes and childish innocence. Chiyo is befriended by Pumpkin, another maid at the okiya, but the two are soon driven apart. Chiyo is shown compassion by the Chairman and another, more successful geisha, Mameha, who takes her under her wing as her "little sister," furthering the battle between Chiyo, now called Sayuri, and Hatsumomo. As Sayuri is trained in the art of being a geisha, learning how to walk, talk, dance, and serve (up to a point) in order to please and honor her distinguished male clients, World War II looms on the horizon, threatening to upend Japan and its old ways.

Visit the official Memoirs of a Geisha website. | View the trailer.